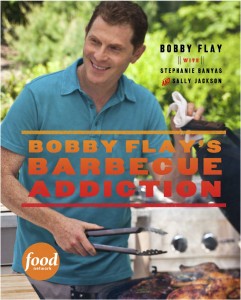 Bring a large pot of salted water to a boil. Working in batches, add the lobsters and boil for 10 to 12 minutes; they will be about three-quarters done. Drain well and let cool. The lobsters can be parboiled a few hours in advance, covered, and kept refrigerated. Bring to room temperature before grilling.

Heat your grill to high for direct grilling.

Pull the outer husks down each ear of corn to the base. Strip away the silk from each ear of corn. Fold the husks back into place and tie the ends together with kitchen string. Place the ears of corn in a large bowl of cold water with 1 tablespoon salt for 10 minutes.

Remove the corn from the water and shake off the excess. Put the corn on the grill, close the cover, and grill, turning every 5 minutes, for 15 minutes, or until the kernels are almost tender when pierced with a paring knife.

Peel back the husks and remove. Brush the corn with oil and season with salt and pepper. Grill the ears until the kernels are lightly golden brown on all sides, about 5 minutes. Use a sharp knife to remove the kernels from the ears.

Brush the serrano with oil and grill, turning as needed, until charred all over, 6 to 8 minutes. Remove to a bowl, cover, and let sit for 10 minutes. Peel, seed, and roughly chop.

Put the avocados and crème fraîche in a medium bowl and mash slightly with a fork. Add the corn kernels, chile, diced red onion, cilantro, lime juice, Tabasco, and 2 tablespoons of oil. Season with salt and pepper and gently stir to combine.

Split each lobster down the underside with a heavy knife, taking care not to cut through the back shell, so that the lobster is still in one piece but the inside flesh is halved and exposed. Brush the cut sides of the lobsters with oil and season with salt and pepper. Grill the lobsters, cut side down, until lightly charred and heated through, 5 to 7 minutes.

Toast the buns, split side down, on the grill until lightly golden brown, about 20 seconds.

Remove the lobster meat from the shells and coarsely chop. Fill each bun with lobster, charred corn and avocado, and some parsley leaves.