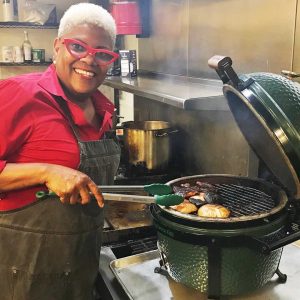 Chef Deborah VanTrece began her culinary career in 1994 when she graduated as the valedictorian of her class at the Art Institute. Working as Executive Chef for a catering company by 1996, Chef VanTrece enjoyed great success during the Centennial Olympics in Atlanta. She was hired to cook for several foreign dignitaries and executives, and won acclaim for her mastery of delicious globally-informed cuisine. After the Olympics, Chef VanTrece opened Edible Art, a small restaurant and catering operation, where her thoughtful take on soul food was a fresh reminder of the virtue of purity in cooking and eating. At Twisted Soul, Chef VanTrece continues to serve the concept of global soul food – the soul food of different cultures around the globe as she has experienced them. Opened in late 2014, and transitioning locations in 2016, Twisted Soul Cookhouse & Pours’ was voted best new restaurant in Atlanta by the Georgia Voice, ranked among the best new openings in Atlanta by Thrillist and has been featured on the Cooking Channel’s ‘Late Nite Eats’ and Genius Kitchen’s ‘Carnivorous’.

Set the EGG for indirect cooking at 325°F/163°C with hickory smoking chips.

In a bowl combine salt, pepper. Sprinkle mushrooms with salt and pepper, then toss in olive oil.  Place mushrooms in a sealed plastic bag and allow to marinate for 1 hour.  Remove the mushrooms from the bag and place on the cooking grid. Smoke the mushrooms for 25 minutes; remove from the EGG and set aside.

To build the salad, place spinach and arugula in a salad bowl. Slice portabella mushrooms, thinly. Roll each slice and place on the bed of greens. On either side of the portabella rolls, place shitake mushrooms, and place oyster mushrooms on top. Crumble bacon over the mushrooms and top with goat cheese crumbles. Drizzle with tomato persillade and serve. Serves 4.

Pulse tomatoes, parsley, garlic, lemon juice, salt and black pepper in a food processor. Slowly add in olive oil, a little at a time. Store in a cover container for up to 2 weeks.